Have you been looking for the werewolves of the mini-moon? Then you’ll have to look very hard tonight because tonight of all nights, these werewolves know how to not be seen.

This is not due to any special invisibility power nor technologies that some other werewolves possess, you understand, but for one small lucky - or unlucky! reason… 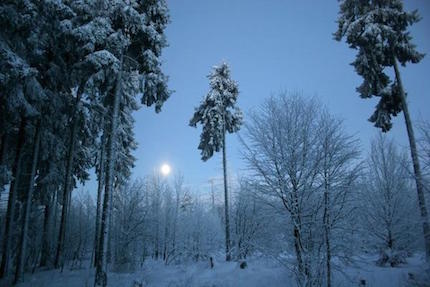 Werewolves of the mini-moon

(Whether you see it as lucky or unlucky, will depend on your point of view about such things.)

A small reason because it’s all about one  very small power, gained by a wish once won from the leprechaun.

Now the exact details of this wish have been muddied with time and retelling but the core truth of it remains unchanged. A Wind Werewolf once freed a very important leprechaun trapped at the height of the mini-moon. A leprechaun king or queen who gave that werewolf and his kind the sometimes power of small bound to the March mini-moon.

(Although many tellers insist that leprechauns, who are very anti-monarchy, never, ever had kings or queens and it was not a Wind Werewolf but a Singing Werewolf who freed them.)

(All tellers generally agree that it could never have been a Death Werewolf.)

Whatever the case, this happened back in the days of powerful kings and queens and shiny pennies, when the practice of leprechaun trapping was commonplace.

Back then almost everyone learned how to build a functioning leprechaun trap. Or they tried, at least. The truth is that these traps rarely if ever functioned, Leprechauns being much better at springing traps than most people will ever be at building them. People believed, you see, that a trapped leprechaun must grant you one powerful wish. Anything you could wish. While this may or may not true, people believed it and the trapping of leprechauns became at once a global pursuit — a sport, an art, even a profession. Or leprechaunage,as it came to be known.

On a mini-moon like tonight, all of this leprechaun trapping reaches an annual frenzy. This of course makes perfect sense. Leprechauns rule the mini-moon, for those two short nights when the moon is smallest seen. Or at least they want to rule it, that much is perfectly clear. It’s the main reason why St. Patrick’s Day is set to the month of March.

A fact well-known to would-be leprechaun trappers or leprechauneurs as they were sometimes called. On the mini-moon, leprechauns are legion – and distracted, armed with elaborate schemes and plans to build their mini-empires beyond the mere draining of pocket change and wishing wells. Far beyond magic sofas and shoes. Plans that go as big and far as the moon itself.

Some werewolves think it was an accident or a leprechaun joke. What werewolf would want to be transformed into the littlest lycanthrope that you could imagine whenever the mini-moon rises?

They say that the werewolf in question must have trapped into wishing this way. That the werewolf was just trying to counsel an unlucky leprechaun to be happy about their small size by saying something like, “Hey, small is powerful too! I wish that I could be smaller sometimes!”

To which the crafty leprechaun would have said something like, “Done! Your wish is granted. From now on , you and your kind will be find the power of small at your beck and call, under the mini-moon.

And that’s how it happened. More or less.

15 thoughts on “Werewolves of the Mini-Moon”